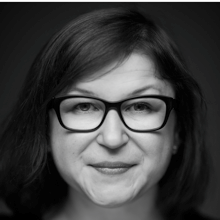 Sandra graduated from the Theatre Faculty at The Academy of Performing Arts in Bratislava. During her studies she cooperated as a
booking manager with the renowned Slovak director and performer Sláva Daubnerová and as production manager, lecturer and project manager with the legendary Pôtoň Theatre. Later she was employed at the Národné osvetové centrum in Bratislava for a period of two years, on a position of project manager of the Scénická žatva festival. She also cooperated as PR manager with the independent SkRAT Theater and other bodies.

Sandra has started her cooperation with the civic association Post Bellum SK in 2015, originally on a position of a project manager. Since May 2016 she holds a position of the Executive Director. Thanks to Sandra’s efforts, Post Bellum SK has grown into one of the leading Slovak European remembrance organisations.

Sandra was born in Poprad in the heart of High Tatras mountains, but she prefers pandas to chamois (the mountain goats). She loves hiking in nature, travelling (her favourite destination is Israel) and she is a proud auntie of a small girl.